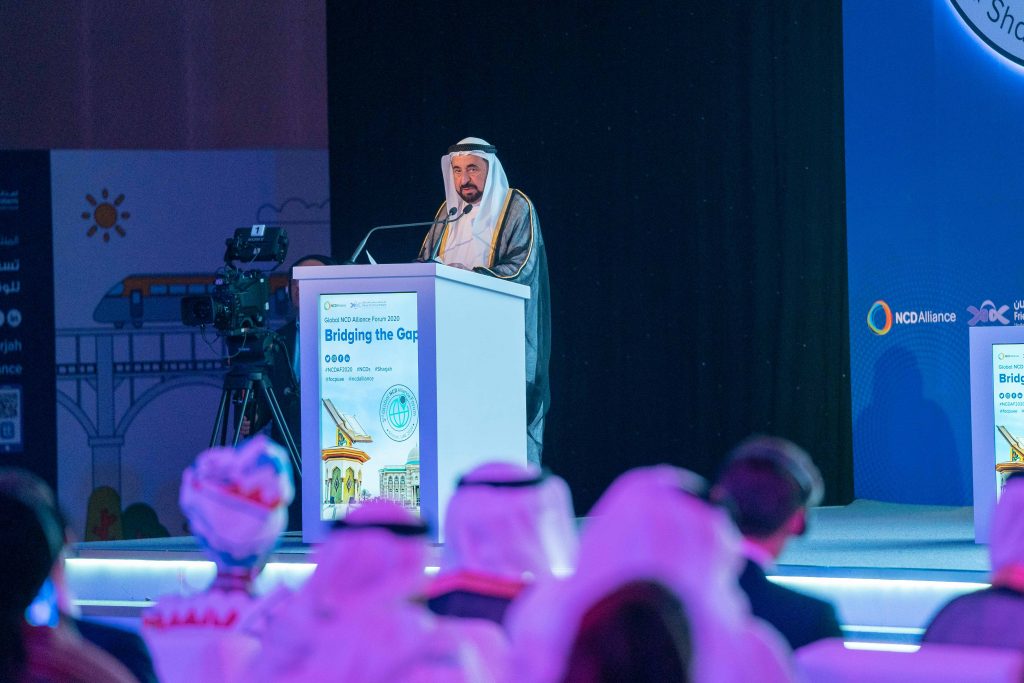 “More than 18 million cases of cancer were discovered in 2018 and we have lost 900,600 men and women to it. According to World Health Organization, there will be a 60 percent increase in cancer incidences in the next 20 years, with 81 percent cases surfacing in nations that have a lower level of socioeconomic development, and whose health infrastructure and living conditions need significant improvements,” His Highness Sheikh Dr. Sultan bin Muhammad Al Qasimi, Supreme Council Member and Ruler of Sharjah, stated during his welcome address at the inauguration ceremony of the third Global NCD Alliance (NCDA) Forum, which began today (Sunday), at the Al Jawaher Reception and Convention Centre in Sharjah.

“However, in the past few years, there has been tremendous development towards finding a cure for cancer. We thank torchbearers like Sheikha Jawaher bint Mohammed Al Qasimi and Friends of Cancer Patients (FOCP), all the delegates attending this Forum for their tireless efforts, which make it possible for the world to identify such fatal non-communicable diseases in their early stages and treat them effectively,” the Sharjah Ruler added.

His Highness stressed on the need to coalesce communitywide efforts to safeguard people’s health and wellbeing by promoting healthy habits, rally against bad lifestyle choices like smoking and introducing effective vaccinations.

The three-day forum, organised by the Friends Of Cancer Patients (FOCP) in partnership with the global NCD Alliance (NCDA), has convened 400 guests and attendees from 80 countries across six continents, including key civil society stakeholders, health experts and academics and researchers to hold key discussions on strengthening the global response against non-communicable diseases (NCDs), at a time when NCDs are responsible for 41 million or 71 percent of all deaths worldwide.

It was also attended by HE Madam Sawsan Jafar, Chairperson of the FOCP board of directors and HE Abdul Rahman Mohamed Al Oweis, UAE Minister of Health & Prevention.

During the event, Her Excellency Sawsan Jafar was honoured with “The Sheikha Jawaher Medal for Contribution and Excellence” by Her Highness Sheikha Jawaher Al Qasimi. Her Highness thanked HE Jafar for guiding FOCP’s efforts in cancer control and healthcare years, and for leading the non-profit’s collaborations with members of the global NCD civil society to raise awareness around NCDs, galvanise stakeholder action and support efforts to reverse the NCD epidemic.

Her Highness Sheikha Jawaher Al Qasimi also welcomed all attendees of the forum to Sharjah, thanking them for their continued commitment to working together for the creation a more equitable and healthier future for everyone around the world.

Delivering his inaugural speech, HE Oweis said, “On my way to this important forum today, I passed the Sharjah University City and was reminded of the common purpose that brings us together here – people and the UAE’s focus on developing them. It is due to the leading efforts of HH Sheikh Dr. Sultan Al Qasimi and his wife, Sheikha Jawaher Al Qasimi that Sharjah was named a Child-Friendly City in 2018 by the UNICEF and The UNESCO World Book Capital in 2019. The future holds more achievements, and we thank these two visionaries for all their successful human-centric endeavours for development.”

Sharjah stresses on a united, whole-of-society approach to tackling NCDs

Speaking during the inauguration ceremony, HE Sawsan Jafar emphasised: “To tackle the growing burden of NCDs, we need a united whole-of-society approach, with a strong and vibrant civil society. Sharjah has been working hand-in-hand with the NCD Alliance to encourage stronger participation at this key global meeting for NCD civil society, and the facts speak for themselves. Forty-three national and regional alliances participated in the first Global NCD Alliance Forum in 2015. I am proud to say that at this Forum, we have 65 alliances lending their participation and support.”

“As a city that puts its people and their health first and pursues a human-centric strategy for development, it is only fitting for Sharjah to host this most important international forum on non-communicable diseases,” she added.

During her address, HE Jafar also asserted Sharjah’s support to the countries that have been gripped by the coronavirus outbreak. “We want to say we are ready to face all challenges and address them,” she affirmed at this leading global health forum.

Recollecting the Forum’s previous achievements, Todd Harper, President of NCD Alliance, said, “The third Global NCDA Forum will build on the successes of the first two editions by mobilising key civil society stakeholders and consolidating the Forum as the key global meeting for the NCD civil society. Since its inception in 2009, the NCD Alliance has been a major catalyst in securing political priority for NCDs at the global level.”

He added, “This year, the NCD Forum will focus on action enablers, translating solutions and what works in local and national contexts. It will also offer a civil society perspective and take a political economy lens on the key catalysts for change that can bridge the major gaps in the NCD response.”

Speaking at the opening of the Forum, Katie Dain, CEO of the NCD Alliance, said, “This Forum illustrates the diversity and vibrancy of the movement, encompassing NGOs, youth organisations, academia, faith-based organisations, and professional societies, to name just a few. It also highlights a broader shift within our movement and this shift in focus is bearing fruit. By putting people first in our global advocacy work, governments for the first time made concrete commitments at the 2018 UN High-Level Meeting on NCDs to meaningful engage civil society and people living.”

In the lead up to the forum’s inaugural ceremony, two meetings titled ‘Elevating the youth NCD agenda to high-level stakeholders’ and ‘Civil Society Coordination Session: national, regional and global action’, were held. The first session talked about the unique and highly valuable perspectives young people bring to scaling up NCD response, while the latter stressed on the importance of a collective call for action to handle issues pertaining to NCDs.

In its third edition, the Forum intends to take forward the emirate’s mandate of turning the spotlight on and galvanising action for the non-communicable disease (NCD) epidemic, one of the most urgent health and development challenges of the 21st century. Themed Bridging the Gap, the Forum kicked off seeking to accelerate the global efforts to translate political commitments into action and implement them at the national and local levels. It reflects Her Highness Sheikha Jawaher bint Mohammed Al Qasimi’s and FOCP’s commitment to the global fight to prevent and control NCDs.

The Forum runs until Tuesday, February 11, and has convened representatives from the growing network of national and regional NCD alliances and provided a platform for knowledge exchange, capacity building, priority setting, and facilitating twinning initiatives across the alliances.