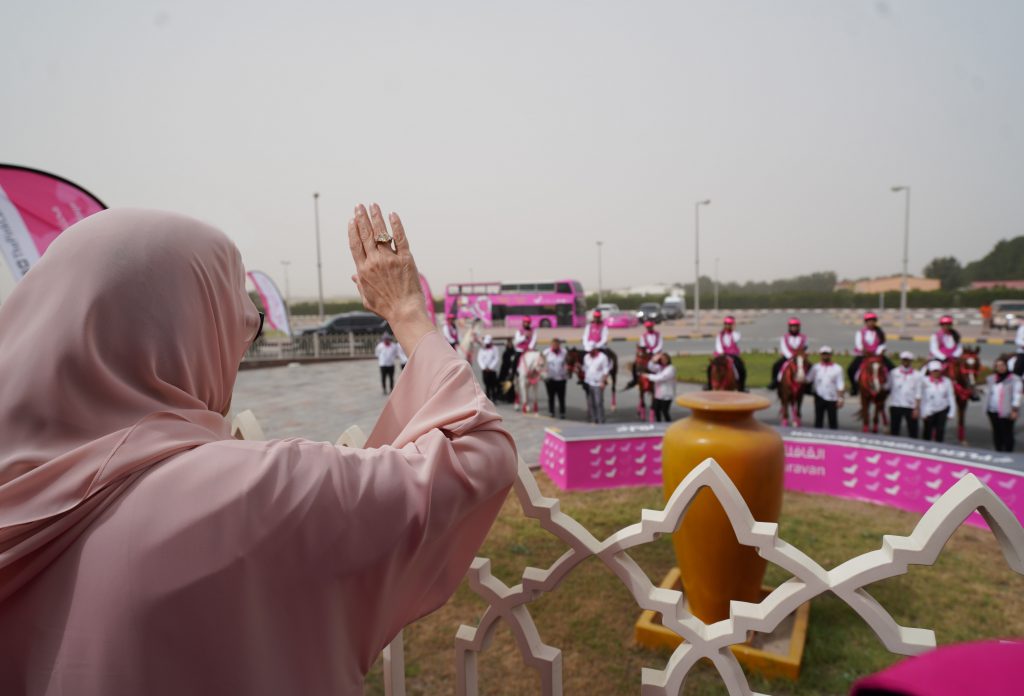 The nation’s premier breast cancer awareness campaign is celebrating its milestone year with a 10-day ride this time, which will conclude in Abu Dhabi next Friday, March 6.

A group of 350 doctors and medical professionals, 150 riders and over 100 volunteers will be travelling 150+ kms across the seven emirates, advocating the importance of regular screenings and early detection of breast cancer in successfully tackling the disease. The ride, which has adopted the slogan ‘Plenty is not enough’ for this edition aims to deliver 10,000+ free screenings across 7 fixed clinics to citizens and residents of the UAE this year, and is playing an instrumental role in furthering the UAE’s goal of bringing down cancer fatalities by 18 percent before 2021.

The Sharjah Ruler and his wife, Sheikha Jawaher Al Qasimi signaled the start of the ride at the Sharjah Equestrian and Racing Club, where the opening ceremony was hosted.

“Society doesn’t develop and grow without combined efforts,” His Highness Sheikh Dr Sultan bin Muhammad Al Qasimi said in his inaugural address, adding, “we want to pass on to our children the values of volunteerism and community service. We want to tell our donors and supporters that their contribution of AED 1 is worth one million when we put in the hands of those who are tackling the increasing number of cancer cases in the UAE and around the world.”

The Sharjah Ruler added: “On behalf of Sharjah, Her Highness Sheikha Jawaher has led tremendous efforts to establish several centres dedicated to cancer awareness, treatment and research around the world. Some are already operational and some others will be launched soon. In mid-March, the UAE will witness the launch of the Sharjah Cancer Research Centre for Cancer. Also, a new building for the National Cancer Institute in Cairo University will be inaugurated.

”Please thank HH Sheikha Jawaher for her tremendous efforts,” His Highness concluded, thanking Pink Caravan Ride’s longstanding partners for their continued and growing support to safeguard the health and wellbeing of people from all backgrounds in the UAE.

Our nation’s continued progress is not based on material possessions, but an abundance of human wealth

Addressing the ceremony’s attendees, Her Highness Sheikha Jawaher said: “When I run my eyes over this group of riders, doctors, volunteers and partners, who will lead efforts of the 10th Pink Caravan Ride, I see a reflection of every human and cultural value our Emirati society is built upon. I am assured that the hope and determination you carry in your hearts will forever safeguard our future. Our nation’s continued progress is not based on material possessions, but an abundance of human wealth.”

“Today, as the Pink Caravan Ride enters its tenth year, your ambitions haven’t weakened. You have instilled awareness that wasn’t there 10 years ago; attracted more partners and supporters, given the same people the courage take control of their wellbeing who wouldn’t touch a taboo topic or did not know that breast cancer affects both women and men,” His Highness added.

Stressing that the Pink Caravan Ride’s work won’t end until cancer is eradicated, the Sharjah Ruler noted: “I urge all institutions, governmental and private bodies to collaborate and continue working for our homeland. In this context. I am pleased to announce that the campaign has a new partner and advocate, Sheikh Fahim Al Qasimi, Chairman of Sharjah Department of Government Relations, who will be serving as Special Envoy.”

Pink Caravan Ride is not just an annual campaign; it’s a journey of life

Reem BinKaram, Head of PCR’s Higher Steering Committee, reaffirmed the campaign’s vow to “continue our ride until our message of the importance of early detection to confront the dangers this disease poses to society, reaches every home, individual and institution in the UAE.”

BinKaram emphasised that the breast cancer awareness campaign has accomplished three significant goals including heightening awareness in the UAE and offering free checkups to more than 64,100 people, which resulted in the detection of 75 positive cases; advocated for the creation of a national cancer registry to serve as a comprehensive and updated database, which was created by the UAE Ministry of Health and Prevention; and provided a world-class mobile medical clinic that travels the seven emirates to offer free screenings throughout the year.

“We are not done yet,” she said, adding, “more people need to get checked and those who already do need to get their re-examinations done every year. The disease does not wait, and every minute during which it goes undetected becomes a decisive factor in the outcome.”

BinKaram congratulated all participants of the tenth edition of the campaign, saying, “The campaign has taught me that impossible can be turned into possible if we pursue our goals with patience and perseverance. Pink Caravan Ride is not just an annual campaign; it’s a journey of life.”

HE Sawsan Jafar, Chairperson of FOCP Board of Directors, emphasised that FOCP designed this campaign to realise the vision of HH Sheikha Jawaher Al Qasimi, to “build an educated and informed society and create a vibrant awareness culture in community about cancer risks and ways to treat and prevent it. We have achieved many successes over the past nine years – among them was the permanent mobile medical clinic operated by FOCP, which offers free high-quality screenings and checkups all year round. I thank everyone who has dedicated their time and efforts to the campaign’s noble cause; Pink Caravan Ride reflects the true image of the Emirati society to the world.”

Titled ‘Social returns on investment: A driver of sustainable access to quality cancer screening’, a panel discussion was organised at the opening ceremony. Moderated by Dr Sawsan Al Madhi, Director General of FOCP and Head of the Pink Caravan Ride Medical and Awareness Committee, the discussion brought together key health industry stakeholders to shed light on why making equitable access to quality cancer screenings a strategic objective and a shared responsibility of multisector players will have a long-term positive impact.

The discussions modelled Pink Caravan Ride within the SRoI framework, offering the campaign’s supporters and philanthropic partners a greater understanding of the social impact of the campaign.

At the end of the ceremony, the pink brigade set off on its journey towards the day’s first stop – Sharjah Broadcasting Authority. The ride trotted along the Mughaider Children Center and Muwailih Commercial, before warping up their first day at Sharjah World Book Capital 2019 Monument at 7pm, traveling 11.2 kilometres.

On Thursday, February 27, the ride will travel 21 km, setting off from the Sharjah Chamber of Commerce and Industry at 8am, and march through the Sharjah Islamic Bank to make a second stop at the Abdullah Ibn Abbas Mosque, followed by Mega Mall Sharjah, Sharjah Police Headquarter and Supreme Council For Family Affairs before it reaches the last stop of the day – Al Majaz Waterfront at 5:20pm. A host of awareness events will be organised at Al Majaz Waterfront in partnership with Sharjah Children.

Alongside the fixed clinic in Al Majaz Waterfront, which will be offering free checkups from 4 – 10pm until March 6, four daily clinics in Sharjah will be dedicated to women’s checkups at the Mega Mall, Sharjah Ladies Club, Sahara Mall and Sharjah Broadcasting Authority. A fifth clinic at Jubail Market will receive men.

The mobile clinic will be stationed at the Sharjah Broadcasting Authority, from 9 am – 5pm.

The Pink Caravan Ride has been launched in partnership with several institutions, notably the Sharjah Islamic Bank (Strategic partner), and the Sharjah Broadcast Authority, which is the Official Sponsor and partners of the Pink Caravan’s Mobile Medical Clinic.

Over the past nine years, the PCR has made landmark achievements, foremost of which offering free early-detection examinations to more than 64,100 people and diagnosed 75 cases, all of whom have been offered free treatment by FOCP.