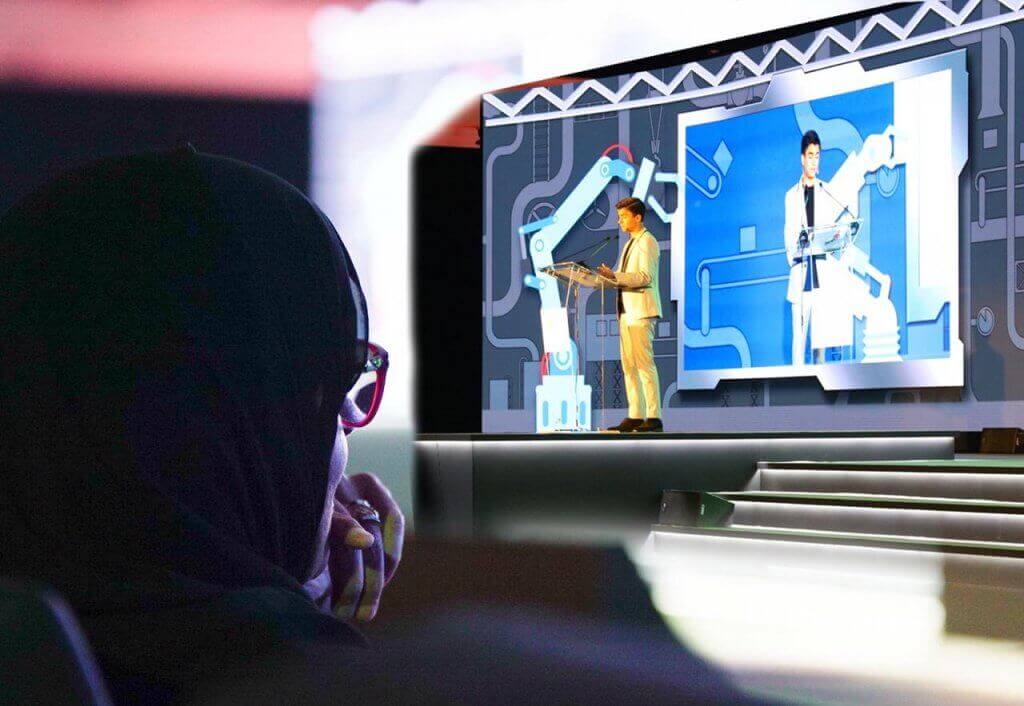 His Highness the Ruler of Sharjah honoured the guests of the Festival: Emirati director Abdullah Al Kaabi, Bahraini actress Haifa Hussein and the famous Jungle Book actor who played the role of Mowgli, the Indian-American Neel Sethi, before he toured the various parts of the festival.
Sheikha Jawaher bint Mohammed Al Qasimi, said: “The festival, which brings along every year new elite of children – oriented films, has become a new festivity of childhood, with its heroes, innovators and viewers who believe in the power of the arts in the development of child’s imagination and raising him on the beauty and noble values and stories.”
Highlighting the important role of the cinema on children, Sheikha Jawaher  said that the cinema, as an international language, has a considerable effect on the culture of the child in particular, adding that the cinema can either be a constructive or destructive tool for children.
Sheikha Jawaher explained that SICFF has proven its ability and worth of not only presenting important cinematic productions in terms of its noble themes, but also with regard to establishing a creative Arab generation capable of building an Arab creative heritage and employing cinema to address its issues and aspirations.
Attending the opening ceremony along with His Highness the Ruler of Sharjah were Sheikh Sultan bin Ahmed Al Qasimi, Chairman of Sharjah Media Council (SMC); Khawla Al Mulla, Chairperson of the Sharjah Consultative Council (SCC); and Noura Al Noman, Chairperson of Sheikha Jawaher Al Qasimi Executive Office.
As per the directions of His Highness the Ruler of Sharjah, Sheikha Jawaher bint Abdullah Al Qasimi, Director of FUNN and Sharjah International Children’s Film Festival, announced that the festival will be launched next year under the name of “Sharjah International Children and Youth Film Festival “.
“Over the past six years, the festival has been keen to lead new generations to their dreams, provide them with the knowledge and experience that enable them to employ the image and the beauty of art, to express their selves,” Sheikha Jawaher bint Abdullah Al Qasimi said.
She added that SICFF has showcased hundreds of films, held hundreds of workshops and courses aimed at thousands of talents of children and young people, and hosted hundreds of artists, experts and filmmakers.
She highlighted the positive influence of the festival on children adding that the festival continues to communicate the message of Sharjah written by His Highness the Ruler of Sharjah.
SCIFF 2018 will witness 54 films from 17 countries making their premiere in the Middle East, Gulf Region, and the UAE. The participating films cover several categories, including the Best Feature Film, Best Documentary Film, Best Animation Film, Best International Short Film, Best Student-Made Film, Best Short Arab Film, and the Best Child-Made Film.
SICFF 2018 will also organise 6 dialogue sessions with the participation of experts, stars and specialists in the field of the cinema.
The festival, which opened in 2013 and is held annually in October, aims to enhance the talents and creativity of children and young people and showcase their cinematic productions to ensure their usefulness, benefit and various media opportunities. It is also an artistic event that is an important link between international films and the latest in media, in addition to its contribution to children’s efforts to discover more about peoples’ cultures and to spread world peace, and to inform them of the importance of how all people, with their different cultures and beliefs , coexist in one world in peace and equality.
FUNN aims to nurture a future generation of creative artists in media and film and has a remit to promote new works in media and films made by children and young filmmakers of the UAE. Its larger goal is to foster talent through these local and international festivals, conferences and workshops and to form a close-knit network of talented youths who can share experiences and expertise on a global scale.