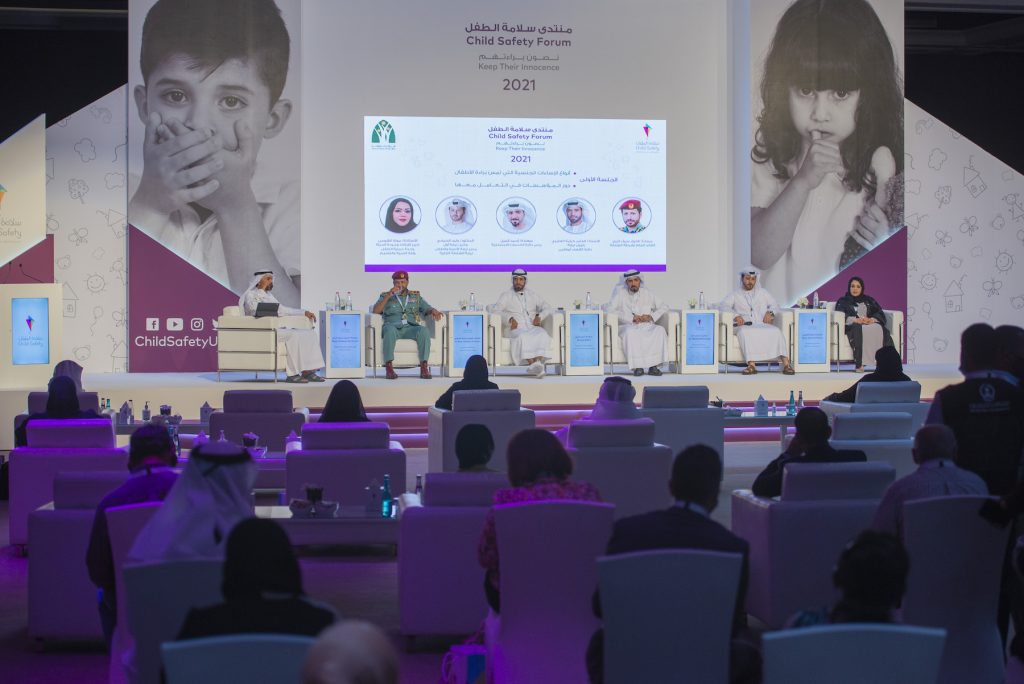 The second edition of the Child Safety Forum, organised by the Child Safety Department (CSD), an affiliate of the Supreme Council for Family Affairs in Sharjah (SCFA), opened on Wednesday morning with Her Highness Sheikha Jawaher bint Mohammed Al Qasimi, Chairperson of SCFA, asserting that the “family is the compass guiding Sharjah’s journey of development and the driving force that led us to provide the best social services with the child at the core of our programmes and initiatives”.

In a statement marking the opening of the forum Sheikha Jawaher further conveyed: “Childhood is a period of innocence; it holds formative years of our lives during which our personalities are shaped. For this reason, His Highness Sheikh Dr. Sultan bin Mohammad Al Qasimi, Supreme Council Member and Ruler of Sharjah, has never wavered on launching innovative projects that are designed to promote the psychological, physical, and intellectual wellbeing of children, and in turn, strengthen Sharjah’s appeal as a safe, nurturing haven for children where they enjoy their rights, express themselves and realise their fullest potential.

“These initiatives, based on a scientific and community-based approach, are our way of addressing issues that impact child safety and welfare. We hope this forum shines light on the latest knowledge, expertise and global best practices, which will educate parents on the importance of monitoring children and engaging with them as they learn and pursue their interests on both online and offline platforms. The outcomes and recommendations put forth at this forum will help us all better understand our responsibilities – be them individual or organisational – to ensure our children’s safety by protecting them from various forms of abuse”, Her Highness concluded.

Held under the theme ‘Keep Their Innocence’ at Al Jawaher Reception and Convention Centre (JRCC), Sharjah, the day-long forum brought together more than 100 federal and Sharjah-based government officials as well as a host of child welfare experts to identify and analyse direct and indirect malpractices that lead to child abuse in order to define responsibilities of parents and child-centric entities to promote the Emirati society as a role model in protecting the innocence of children and the rights of all its members.

In her welcome address, Hanadi Saleh Al Yafei, Director of the Child Safety Department (CSD), said: “Well formed and vibrant communities are those that deal with negative issues proactively and go by the principle of ‘prevention is better than cure’. Especially so when these issues affect the most vulnerable segment of community – children. Sharjah strongly upholds this approach under the guidance and directives of the His Highness Sheikh Dr. Sultan bin Muhammad Al Qasimi, Member of the Supreme Council and Ruler of Sharjah and his wife, Her Highness Sheikha Jawaher Al Qasimi.

Al Yafei stressed that healthy social interactions and relationships are a product of the physical and mental wellbeing of children and will play a key role in achieving the future goals of Sharjah’s cultural project “which places child safety at the core of its ambitions”.

“No one should stay silent while witnessing child abuse or ignore instances of the innocence of children being harmed. We believe that achieving this requires strong and continued cross-sectional cooperation amongst all stakeholders of child safety in the UAE, the region and around the world who will bring in relevant expertise and specialisations. We care about the safety of every child in the world, and we will assist in providing everything necessary to protect them”, she further noted.

Panelists unanimously agreed on the key role that the UAE’s legislative bodies can play in strengthening the nation’s child safety framework by introducing higher security and strict deterrents for violators. They also highlighted the need for awareness programmes targeting parents on sensitive topics related to child safety, such as child abuse. They called on families to refrain from leaving their kids alone or unsupervised with other children, in addition to keeping track of their online activities.

Major General Saif Al Zari Al Shamsi noted: “Child safety is of great importance to our department, and for that reason, we have teams that regularly visit schools and organise expert-led sessions to raise children’s awareness of their own safety and wellbeing. Of course, there are challenges we face along the way, which is why we have dedicated teams that work around the clock to be able to respond promptly to any reports of child abuse.”

For his part, HE Al Amer Karama Al Ameri, Head of Public Prosecution, Abu Dhabi Judicial Department, stressed that comprehensive and detailed UAE legislations are in place to protect children, further noting that the family unit is the cornerstone of community. He also clarified that child abuse is successful only when perpetrated behind the veil of deception or by luring children online and result in psychological harm to young children.

HE Ahmed Al Mail, Director of the Social Services Department in Sharjah, hailed the emirate’s leadership in creating a safe and nurturing environment for children and noted that the establishment of Sharjah’s first childcare homes began as early as 1984, which were followed by several initiatives and institutions dedicated solely to child protection under the directives of His Highness Sheikh Dr. Sultan Al Qasimi, and his wife, Her Highness Sheikha Jawaher Al Qasimi. He added that the Sharjah Social Services Department responds to child abuse reports through its Child and Family Protection Centre and coordinates with concerned entities to ensure immediate response.

According to Dr. Walid Al Hammadi, Senior Prosecutor, Director of Prosecution at Sharjah Family Court, child abuse stems from family disintegration. He stressed that the instrumental role of parents in protecting children by observing various safety measures including refraining from leaving them with strangers, and not letting oversight or neglect settle in when it comes to monitoring children’s online activity.

For Moza Salem Alshoomi, Counseling and well-being expert, Ministry of Education, student behaviour regulation protocols must be defined across UAE schools based on the advice and feedback of both teachers and specialists. She advised on the inclusion of rewards within this protocol to encourage positive behaviours and penalties for children who fail to follow the regulations, especially when they might have in any way contributed to their peers becoming victims of physical or psychological abuse. She added that parents must be immediately informed when such incidents are reported.