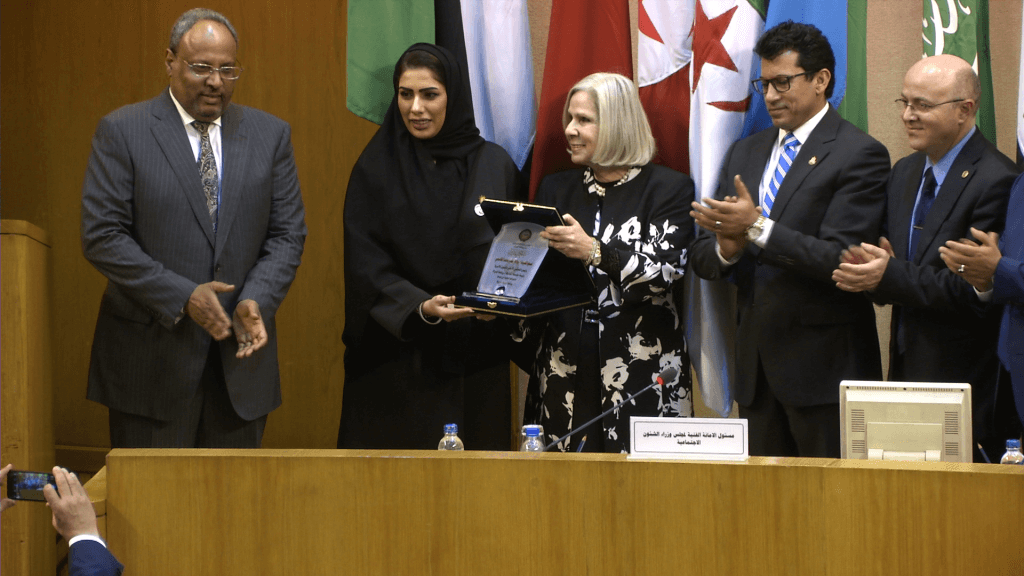 The sporting domain in the Arab world is seeing increasing participation from women, thanks to the unfailing efforts of leaders like Her Highness Sheikha Jawaher bint Mohammed Al Qasimi, Wife of His Highness the Ruler of Sharjah and Chairperson of Sharjah Women’s Sports (SWS).

The visionary’s role in supporting and promoting women’s participation in sports has been recently honoured by The Council of Arab Ministers for Youth and Sports, during their 43rd session held in Cairo, Egypt.

HE Nada Askar Al Naqbi, Director General of SWSF, received the honour on behalf of Sheikha Jawaher Al Qasimi from HE Ahmed Aboul Gheit, Secretary General of the Arab League.

Sheikha Jawaher Al Qasimi’s efforts have been paving the way for a new generation of female athletes to chase their sporting dreams not only in the UAE but in the wider region. Locally, Her  Highness’ efforts go as far back as 1994, when she supported the establishment of women’s basketball, table tennis and volleyball teams.

On the regional level, Sheikha Jawaher was instrumental to the shaping of the GCC Sports Tournament, launched in 1997. In 2012, the event assumed its pan-Arab status and was renamed the Arab Women’s Sports Tournament (AWST). It is the Arab world’s largest competition platform for Arab women today, and is hosted by Sharjah biennially. The 2018 edition of AWST 2018 saw 700+ sportswomen from 67 clubs in 16 Arab nations compete in 9 sporting categories.

AWST is organised by the Sharjah Women Sports (SWS), which was launched by Sheikha Jawaher in 2016 under the directives of His Highness Dr. Sheikh Sultan bin Mohammed Al Qasimi, Member of the Supreme Council and Ruler of Sharjah, to ensure the continuity of Emirati women’s achievements in sports.

While accepting the honour, Sheikha Jawaher reiterated that it is every Arab woman’s right to pursue their interest in sports both as a hobby and professionally, to compete regionally and internationally, and to excel. The SWS Chairperson also expressed her appreciation towards the Arab Council’s continued interest in boosting opportunities for women in sports and commended their efforts to grow and sustain Arab women’s participation in the field.

“Sports embodies human development; it is an integral part of national culture. Therefore, women must enjoy equal access to it. By offering women in the region more opportunities to participate in sports, we benefit everyone. Human capital is developed, the wealth of athletic talent women possess finds expression on local and global platforms, and their participation in competitions brings their countries worldwide recognition and respect. Also, sports has been one of the main bridges between nations and cultures; a cementing force in global relationships. There is so much women can do to accomplish these goals,” Sheikha Jawaher said.

“In Sharjah, we take a keen interest in advancing the Arab women’s sports sector. It is one of our top priorities. Also, inspired by the directives of His Highness the Ruler of Sharjah, we look at the Arab world as a composite mosaic of inseparable units. Thus, we seek to promote the sector through collaborative efforts of sister organisations in Sharjah, the UAE and the region,” Sheikha Jawaher added.

Her Highness has also noted that the emirate has a clear plan to increase women’s participation numbers in sports – it will serve as a benchmark of socioeconomic progress and fulfill a central condition required to ensure that women enjoy their rights.

The Council of Arab Ministers for Youth and Sports, an affiliate of the Arab league, is composed of the Arab Ministers of Sports and Youth. It is responsible for supporting the issues of Arab youth and enabling them to develop their sporting, cultural and practical abilities and talents through programmes approved or proposed by the Council to civil society organisations and local authorities in Arab countries.

Every year, the council selects and honours the most influential personality in the Arab development to be a model of inspiration for the work of institutions and individuals and serve as a catalyst for creativity and perseverance at work. Honouring and recognising outstanding Arab individuals aims to encourage initiatives and personalities that support Arab societies and provide them with the necessary resources to advance the potential of their human assets.