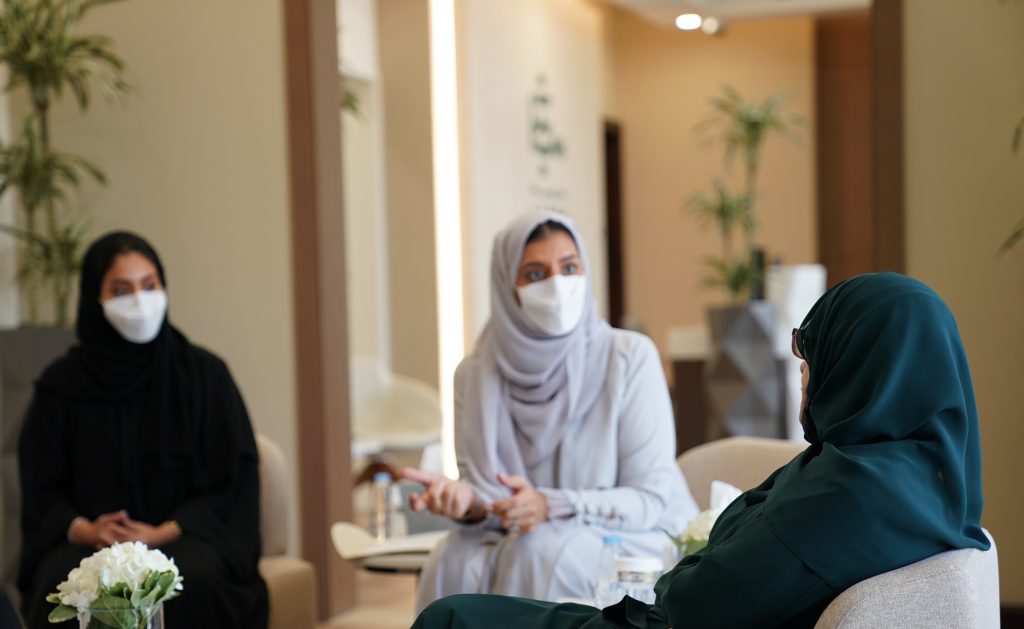 Her Highness Sheikha Jawaher bint Mohammed Al Qasimi, wife of the Sharjah Ruler, and Chairperson of NAMA Women Advancement Establishment (NAMA), has highlighted the vital role of business women in Sharjah and commended their key contributions as drivers of the emirate’s economic advancement. The passion, innovation and creative ideas of female business-owners and entrepreneurs has attracted sizeable investments, helped strengthen and diversify the local economy, and left a distinctive mark on Sharjah’s socioeconomic journey, the NAMA Chairperson further asserted.

These statements were made during Her Highness’s visit to the new HQ of Sharjah Business Women Council (SBWC), a NAMA affiliate. HE Reem BinKaram, Director of NAMA, and HE Mariam bin Al Shaikh, Acting Manager of SBWC accompanied Sheikha Jawaher Al Qasimi on the tour, during which they met the team at SBWC working to realise the vision of Her Highness to advance and empower women in academics, professions, the economy and society.

Being briefed on NAMA’s and SBWC’s efforts in the first half of 2021, Sheikha Jawaher Al Qasimi lauded the achievements of both enitie in implementing targeted projects and initiatives for women’s empowerment in various fields. The NAMA Chairperson was also offered an overview of the entity’s future plans and strategies to further fuel the role of women in Sharjah’s economy via optimal investments in human capital and providing effective solutions for businesswomen in the emirate.

Addressing the NAMA and SBWC teams, Her Highness said: “In the course of overseeing your integrated efforts towards achieving a common goal, I have seen the tremendous results produced by the qualified cadres here who bring passion and purpose to work everyday. You have all  exceeded expectations in advancing the various services we provide to businesswomen and female entrepreneurs in Sharjah. I am proud of you all and trust that NAMA’s mission and vision are in safe hands.”

“The impact of women’s contributions to boosting local and national economic performance keeps intensifying, putting greater responsibility on all of us to keep improving the tools, mechanisms, training and support we provide the community of female business professionals to boldly face the challenges in their respective fields,” Sheikha Jawaher Al Qasimi added.

The NAMA Chairperson continued: “NAMA is putting in great work to steadily design and implement initiatives that embody the vision of His Highness Sheikh Dr. Sultan bin Muhammad Al Qasimi, Supreme Council Member and Ruler of Sharjah, whose unwavering support to consolidate and activate the role of women in the business and entrepreneurial sectors of Sharjah has been a key factor for NAMA success in creating a thriving environment for ambitious businesswomen. The need to support and empower women to break stereotypes and overcome challenges that prevent them from realising their ambitions cannot be overemphasised.”

For her part, Reem BinKaram said: “This visit by Her Highness and the reviewing of our plans, efforts and achievements in the past year is a reflection of the guidance and support Sheikha Jawaher has always honoured us with. Since the beginning of our journey, Her Highness has been keen on overseeing the strategic plans and implementation mechanisms we have designed and developed to boost Sharjah’s professional environment for women.”

Towards the end of the tour, HE Marian Rashid bin Al Shaikh narrated to Sheikha Jawaher Al Qasimi the success stories of SBWC’s members in launching a diversity of brands and enterprises with the help of the entity’s well-rounded training, support ad consultative services. SBWC has been mentoring businesswomen and female entrepreneurs at different stages of their careers by providing training, workshops, key advice as well as administstrative services to get set up.

Her Highness also visited the new head quarters of the Irthi Contemporary Crafts Council (Irthi), another NAMA affiliate, where she was briefed on the role played by Irthi to preserve and promote local crafts of Talli (hand braiding) and Safeefah (palm-frond weaving) practiced by Emirati women who receive specialised training at the Council to reinterpret these crafts and modernise them for global audiences.

During the tour, Sheikha Jawaher Al Qasimi viewed several handicrafts, bags, garments and accessories created by Irthi’s artisans that have been showcased on top runways and prestigious design fairs, placing Irthi on the world map and yielded the entity opportunities for creative collaborations with the likes of Dezeen, an influential architecture and design magazine and digital platform; Design Miami, a global authority for collectable design; and global brands like Bvlgari.

Her Highness met with the Irthi team and praised their efforts, directing them to continue to leverage the resources, knowledge and capabilities at their disposal to continue boosting the global profile and appeal of Emirati crafts. In return, Sheikha Jawaher was briefed by the Irthi team their programmes that have successfully trained, upskilled and provided a steady source of income to more than 500 female artisans, including 300 in Sharjah and 200 in MENA, Central and Southeast Asia.