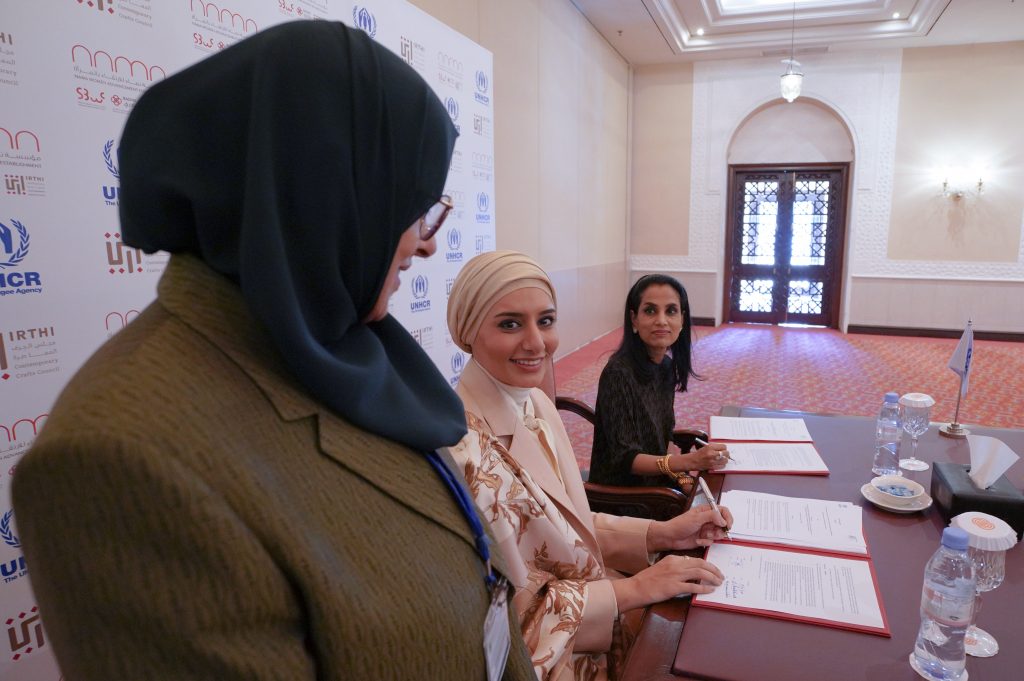 Her Highness Sheikha Jawaher bint Mohammed Al Qasimi, Wife of His Highness the Ruler of Sharjah, Chairperson of NAMA Women Advancement Establishment (NAMA) and UNHCR Eminent Advocate for Refugee Children, has concluded a comprehensive visit to Pakistan, which entailed meetings with several entities and institutions in major cities of Islamabad and Lahore, and identifying sectors that will benefit from NAMA’s expertise in women’s capacity-building and enabling them access to sustainable sources of income.

A key highlight of Sheikha Jawaher Al Qasimi’s visit was her witnessing the signing of a partnership agreement between NAMA and the United Nations High Commissioner for Refugees (UNHCR), which will offer sustainable income to female Afghani carpet weavers in the city of Quetta in Balochistan, which hosts the second-highest percentage of Afghan refugees.

The agreement signing led by Reem BinKaram, Director of NAMA and Ruvendrini Menikdiwela, UNHCR’s representative in Pakistan, in the presence of Hamad Obaid Al Zaabi, UAE Ambassador to Pakistan.

Under the terms of this partnership agreement, a one-year crafts-led project will be led by Irthi Contemporary Crafts Council (Irthi), an affiliate of NAMA, in collaboration with UNHCR to benefit 100 women – including 70 Afghani women refugees and 30 women from the host community of Quetta, who will be commissioned by Irthi to create carpets bearing motifs that reflect the richness and diversity of Emirati culture and heritage. The designs will be exclusive to Irthi.

Pakistan hosts more than 1.4 million registered Afghans who have been forced to flee their homes, of which 68 percent are women. Among these women, around 22 percent fall in the 18 – 59 years age category.

“In these numbers, Sharjah and NAMA identified a pressing need for vocational training, livelihood creation and socioeconomic empowerment,” Sheikha Jawaher noted, adding, “Even as the global humanitarian crisis touches an unprecedented extreme, I believe there is something each of us can do, especially with regard to women as, world over, they are disproportionately affected by war, crisis and displacement.”

This six-day visit is reflective of Sheikha Jawaher’s unparalleled promptness in acting on the pledge His Highness Sheikh Dr. Sultan bin Muhammad Al Qasimi, Supreme Council Member and Ruler of Sharjah, took last December at the Women’s Economic Empowerment Global Summit 2019, asserting he would, “personally support programmes and efforts to empower women around the world, particularly in Africa, Asia and Latin America”.

Her Highness stressed that, “At NAMA Women Advancement Establishment, all our efforts are geared towards the creation of an equitable world for women,” adding, “True human empowerment is achieved when our willingness to uplift those in need is not perceived as a choice, but practiced as a way of life. This is what Pakistan has done for the past 40 years with regards to offering asylum to Afghan refugees. We cannot be reluctant in our response to assisting nations who have been facing the challenges and consequences large-scale humanitarian crises, such as Pakistan.”

Irthi conducted a feasibility study in the lead up to the signing to determine ways to achieve maximum impact from the project, and a framework for implementation was agreed upon by both entities.

Her Highness stressed the importance of adopting a scientific and data-based approach to study the needs of vulnerable communities, and accordingly develop plans that effectively address their specific needs. “With 100 women and their families who will be benefitted by this programme, NAMA seeks to expand the outreach of its sustainable solutions designed and implemented to make women self-reliant and gain permanent livelihood opportunities. With such targeted programmes, we will continue building the resilience of women living in the most challenging of circumstances and advance their role as key human resources,” Her Highness further noted.

Ruvendrini Menikdiwela hailed Sheikha Jawaher Al Qasimi’s leading efforts to secure the future of refugees worldwide, saying, “The partnership agreement between us and NAMA will have a positive impact on the lives of several Afghan refugee families, not just from a financial standpoint as it promises them a continued source of income. Such actions have a far-reaching human impact on people who live in the most challenging of circumstances. Any help that comes their way is fondly celebrated as it is a reminder to them that people care about their well-being; that they are not forgotten.”

During her six-day visit, the NAMA Chairperson also visited the National University of Science and Technology in Lahore, to meet the university’s faculty and graduate students studying advanced technology, and hear from the young students about their challenges and career aspirations.

On another note, a networking event to explore female-led UAE – Pakistan collaborations was organised in Lahore by NAMA under the patronage of Her Highness Sheikha Jawaher, which brought together more than 20 leading Pakistani businesswomen, entrepreneurs and CEOs, who were introduced to NAMA’s newly adopted initiative, the Elevate Platform (Elevate), which was launched by Sheikha Jawaher Al Qasimi in December 2019, with the objective of filling gaps in women’s economic empowerment initiatives in Asia, Africa, South America, and the Caribbean, through the establishment of all-inclusive local networks of changemakers from a variety of sectors, starting at the grassroots all the way up to the top.

According to World Bank reports, only 24 percent of Pakistan’s 49 percent female population is represented in the nation’s workforce, and by introducing Elevate to Pakistan, NAMA seeks to change these realities through the creation of more inclusive and equitable environments, which will enable more women to join the country’s workforce, contribute to the national economy and to sustainable development.