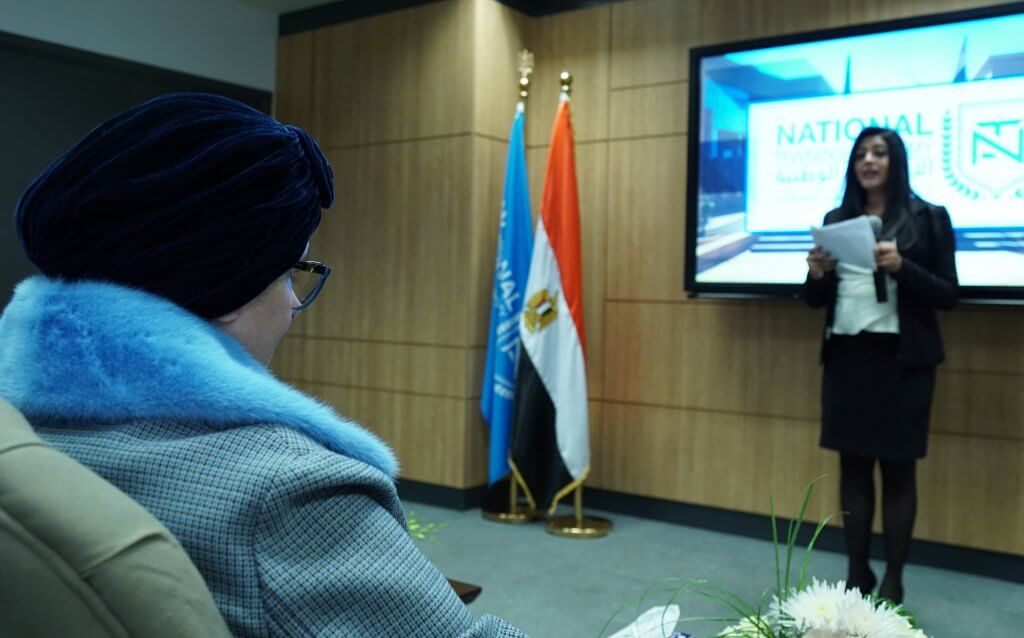 Her Highness Sheikha Jawaher bint Mohammed Al Qasimi, Wife of His Highness the Ruler of Sharjah, noted that Egypt is witnessing a renaissance, both institutionally and in developing their human capital, under the leadership of His Excellency President Abdel Fattah Al Sisi, and the efforts of Egyptian society.

The statement came during Sheikha Jawaher Al Qasimi’s visit to the National Training Academy for Youth Leadership in ‘6th of October city’, Giza Governorate, where Her Highness was received by HE Mohamed Saber Al Arab, Egypt’s former Minister Of Culture, and Dr. Rasha Ragheb, Executive Director of the Academy.

This was part of an official visit to Egypt during which Her Highness met with HE Intisar Al Sisi, wife of President Abdel Fattah Al Sisi to discuss ways to strengthen relations and promote cooperation between Egypt’s social entities and their counterparts in Sharjah.

Her Highness Sheikha Jawaher Al Qasimi toured the academy’s departments and facilities, learned about the courses taught, met trainers and employees, and interacted with the students who presented the academy’s vision and mission. Her Highness introduced the experiences and success story of the Rubu’ Qarn Foundation for Creating Leaders and Innovators, and said: “I am pleased we share the same goals in nurturing our youth, developing their abilities and celebrating their achievements. Being united in purpose unites us as one nation.

“Egypt is fuelled by its youth’s energy; the future of the Arab world rests on the values we instil in our children. At Rubu’ Qarn, we embed the values of citizenship, creativity, innovation, inclusion, impact, and care amongst youth of the UAE, so they are capable to carry the weight of the nation on their shoulders. The National Training Academy for Youth Leadership does much the same. Both are major projects, essential to secure the future of the Arab world,” Her Highness added.

Her Highness pointed out that President Al Sisi’s positive response to the recommendations made by Egyptian youth at the World Youth Conference 2016, confirms that the country’s leadership is embracing the aspirations of its people and reflects readiness to integrate the complete potential of the Egyptian youth in their nation building process, at all levels.

“Human capital is at the core of both the UAE’s and Egypt’s current and future plans. There are several examples to show the Egyptian leadership’s capability in developing effective strategies to nurture their human capital, and strengthen their ability to  innovatively promote a developmental equilibrium, which ensures sustainability,” HH Sheikha Jawaher observed.

Sheikha Jawaher Al Qasimi has praised Egypt’s achievements in the past few years in vital sectors such as health, agriculture, industry, trade, and mentioned the recent construction of cities, academies, mosques and churches, saying, “There is no doubt that Egypt’s long-term plans will help achieve security, stability and prosperity. These steps confirm that Egypt is the heart of the larger Arab nation, and the driving force of its advancement.”

The National Training Academy for Youth Leadership is one of the most important establishments involved in the development and training of youth in Egypt. It was established in 2017 as a result of the recommendations of the country’s first National Youth Conference in Sharm El Sheikh, which was held in November 2016.

The Academy aims to develop youth’s capacities, horn their skills and unleash their potential in all sectors. The Academy’s curriculum is designed in cooperation with a number of international scientific institutions and follows the curriculum of The ‘École Nationale D’Administration’, France.

Rubu’ Qarn Foundation for Creating Leaders and Innovators includes four organizations under its umbrella: Sharjah Children, Sharjah Youth, Sajaya Young Ladies of Sharjah, and Sharjah Capability Development. The foundation’s mission is to achieve full and sustainable integration amongst these affiliated organizations, through designing and implementing future-facing programs, activities and events, in collaboration with local and international organizations.

In addition, the foundation seeks to embed the values of citizenship, creativity, innovation, inclusion, impact, and care amongst youth of this nation. As such, it offers programs and events that combine life skills with specialized tracks and public activities, all suited to the needs of our three target age groups: children (aged 6 – 12), youth (aged 13 – 18) and young adults (19 years and above).