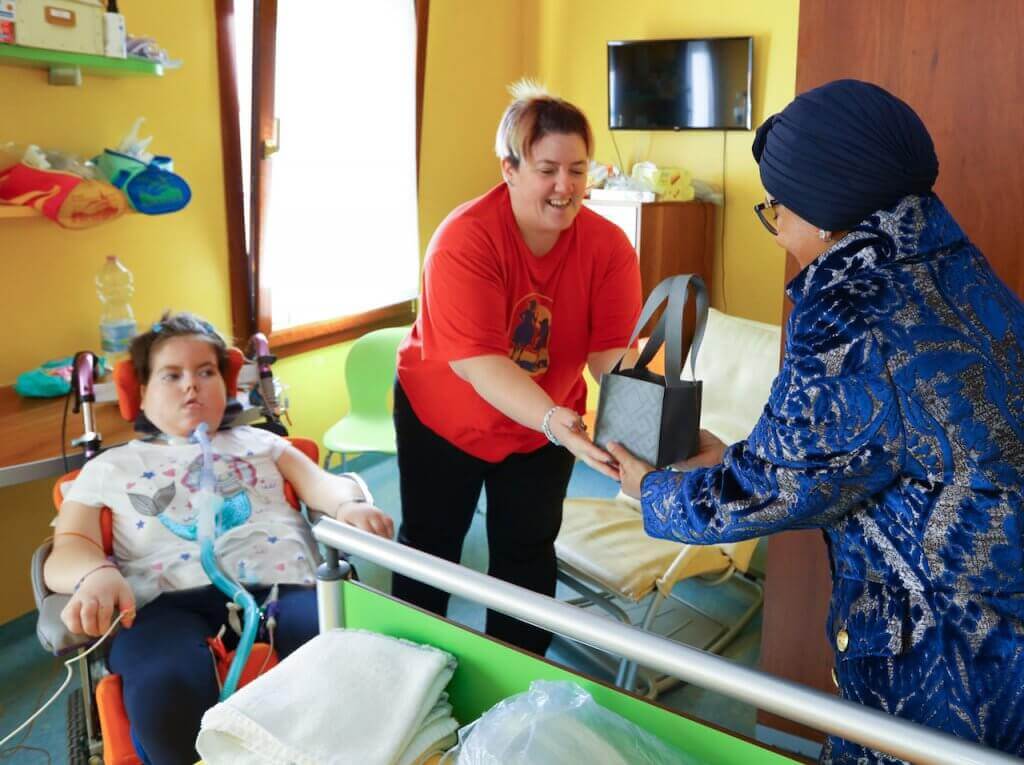 Her Highness Sheikha Jawaher bint Mohammed Al Qasimi, wife of His Highness the Ruler of Sharjah and Founder and Royal Patron of the Friends Of Cancer Patients Society (FOCP), has recently visited the Casa del Bambino (Children’s Hospice) at Padua University Hospital’s Paediatric Department, and the paediatric oncology division at the Umberto I Hospital in Rome, on the sidelines of her participation at the 4th Global Gathering Maruzza Congress on Paediatric Palliative Care, in Rome, Italy, where she was guest of honour.

During the visits, Sheikha Jawaher Al Qasimi acquainted herself with the caregiving processes and medical infrastructure young cancer patients at the Umberto I Hospital. Her Highness also met with a group of children with cancer and other life-threatening diseases and engaged with their families to know more about their experiences and their journey through these difficult diseases. Expressing her deep compassion for the young sufferers and their parents, Jawaher Al Qasimi reasserted her strong will to ensure that they will receive the best possible assistance from both government-led and private healthcare initiatives she supports.

Casa del Bambino adopts the highest standards of care for children afflicted with cancer and other life-limiting diseases whether at hospitals or at home. Sheikha Jawaher Al Qasimi praised the highly qualified nursing and management staff at the children’s facility and the excellent medical care and attention given to the terminally ill children.

During the visits, Sheikha Jawaher said: “Italy is a global example in offering world-class paediatric treatment for children suffering from cancer and terminal illnesses; what makes them truly special is the intuitive and empathetic psychological and moral support they boost their traditional methods of treatment with. Their leading experience has paved the way for cooperation between Italian and Arab medical bodies, including the UAE and Sharjah. The University Hospital in Sharjah will be exploring future collaborations with their Italian counterparts to promote medical research aimed at finding cures for incurable diseases, primarily paediatric cancers, because this illness is a direct threat to the future of nations and the world.”

Her Highness added: “We are living in an era shrouded in plenty of causes of cancer, whether for children or for other age groups, requiring more public and private involvement in vesting in medical research, and in raising awareness about ways of prevention and the importance of early detection of cancer and other diseases associated with lifestyles.”

Emphasising on the fact that the wellbeing of future generations – the main driver of progress – determines the socioeconomic stature and future growth prospects of nations, the FOCP Royal Patron reflected: “Disease prevention, whether through medicine or by changing wrong practices, must be given a priority by governments and public and private institutions.

“Here in Italy, I have met these unsung heroes who have dedicated their lives to making every moment in the lives of terminally ill children memorable, as they realise the incomparable value of each day in a sick child’s life. They have inspired me with numerous ideas, primarily that humanitarian work multifaceted and endless – there is no one way to extend our support to those in need.”

During her visits, Sheikha Jawaher has deeply urged medical organisations and caregivers worldwide to rearrange their priorities to bring children to the top; be it paediatric cancer or other life-limiting or terminal diseases.

Silvia Lefebvre, Chairperson of the Maruzza Lefebvre D’Ovidio Foundation, played a crucial role in arranging these visits for Her Highness Jawaher Al Qasimi.

She said: “Sheikha Jawaher Al Qasimi is an example of selfless support to those in need worldwide. Her Highness has always sought – and continues to – work tirelessly to mobilise international efforts to promote scientific research in cancer prevention and cure and other non-communicable diseases. These efforts are clearly manifested in the regional and global initiatives that come out of Sharjah under her guidance and leadership, which seek to promote stronger healthcare infrastructures, more effective treatments, and financial and moral support to patients and their families, and most importantly, improving people’s access to medical aid.”

Silvia added: “Sheikha Jawaher’s visits and inspiring words have really touched our children and their families, and imbued them with new hope for a bright future.

During these visits, Sheikha Jawaher was accompanied by HE Sawsan Jafar, Chairperson of FOCP, Dr. Sawsan Al Madhi, Director General of FOCP, and Amal Al Mazmi, Director of FOCP’s Patient and Community Affairs.

Besides her support for the issues of women, refugees and victims of wars and crises worldwide, Sheikha Jawaher is internationally recognised for her unparalleled efforts in supporting the global fight against cancer, especially childhood cancer and terminal diseases.

Sheikha Jawaher is actively involved in numerous initiatives that support medical research and research centres dedicated to finding new ways to prevent incurable diseases and come up with effective therapies for them. Her Highness has been playing a major role in promoting government and social accountability towards terminally ill children and their families, calling for greater investment in fighting diseases and eradicating their causes such as poverty, low quality healthcare and educational services in the areas of crises and conflicts.