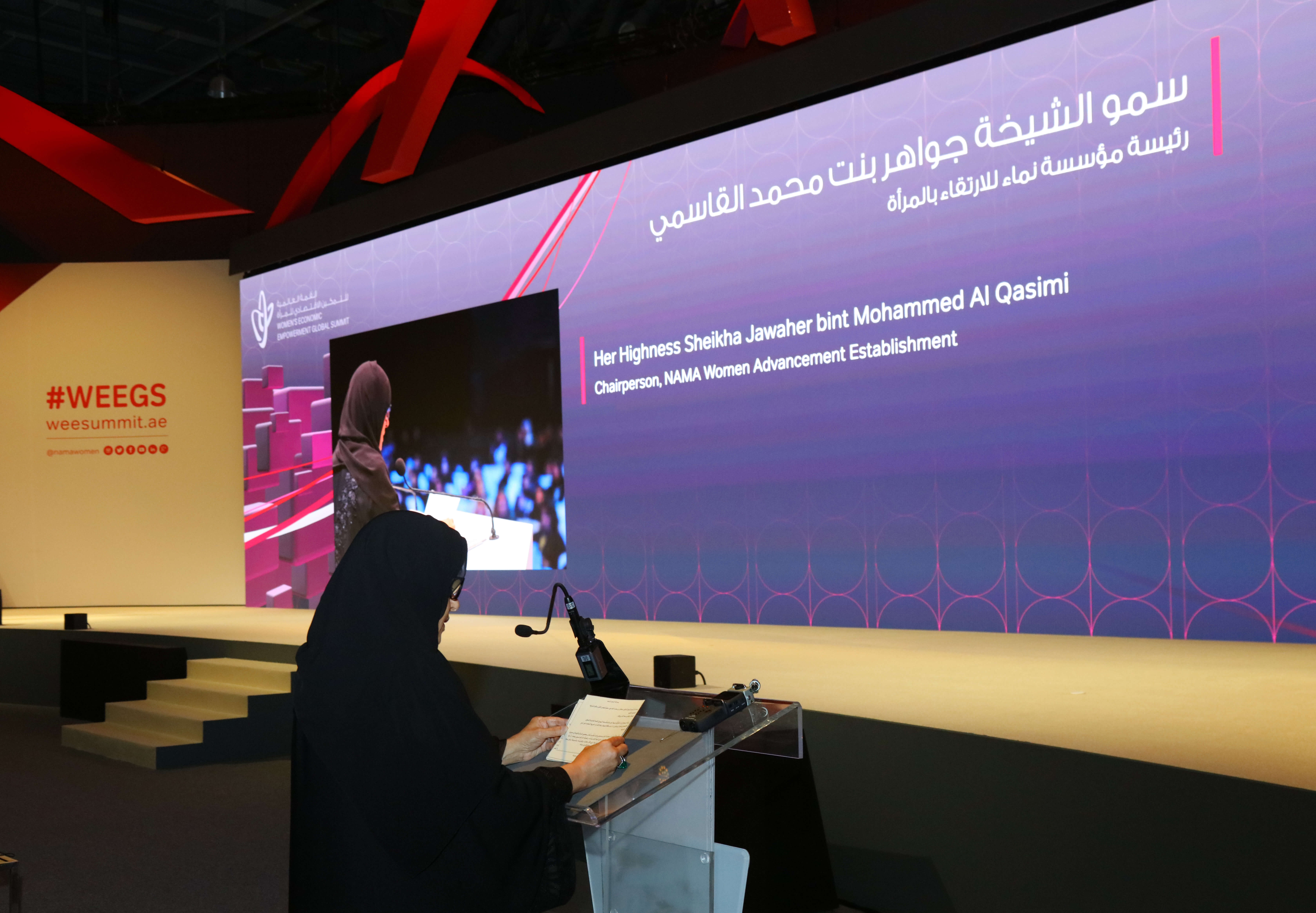 Her Highness Sheikha Jawaher bint Mohammed Al Qasimi, wife of His Highness the Ruler of Sharjah, and Chairperson of NAMA Women Advancement Establishment (NAMA) has approved the dates of the second edition of the Women’s Economic Empowerment Global Summit, (WEEGS), as December 10-11, 2019.

The summit is organised by NAMA in collaboration with UN Women, and will be hosted in Sharjah.

The two-day event will build on the success of the inaugural edition of WEEGS held in December 2017, and combine global efforts to ensure women’s full inclusion in all sectors, promote equal opportunities for women locally and globally, and contribute to advancing the women’s economic agenda within the 2030 Agenda of Sustainable Development.

Sheikha Jawaher Al Qasimi confirmed that this upcoming edition reinforces the UAE’s commitment to continue playing its developmental role locally and globally, as well as its support for the UN SDGs leading to strengthening women’s contributions to nation-building and economic prosperity.

Her Highness underlined that the volume of women’s participation in professional and public life is the most accurate benchmark of national progress. The extent of their participation in society and the economy reflects that they are being ensured their right to education, healthcare and civil liberties, which is a result of effective national development policies.

Sheikha Jawaher has urged state entities developing policies that support women advancement to engage local communities, asserting that the sociocultural nature of the topic of women equitable access to opportunities, change needs to happen at the grassroots, beginning with the appreciation of women’s roles in socio-economic development and respecting their fundamental rights.

“Enhancing an individual’s belonging and loyalty to their society can only be achieved by empowering them to exercise their rights to their nation building. Gender equity is a fundamental right ensured in international norms and conventions and human ethics,” Sheikha Jawaher stressed.

Sheikha Jawaher stressed: “Women’s participation in the global economy can add $12 billion to the world’s GDP and help eradicate high rates of unemployment and illiteracy. However, the goal of ensuring women the participatory rights they deserve goes beyond these figures. Equitable distribution of income and full utilisation of human capital in both advanced and developing communities will offer us all a major impetus in realising the UN SDGs by 2030.”

The Summit, which is held every two years, promotes women’s achievements in various economic sectors, gives women access to the market and emerging economic sectors, as well as provides a platform to share best practices and commitment to action to create an enabling economy for women.

WEEGS 2019 will address the most important factors that contribute to building an integrated and diversified economy for women to better access and participate. The summit will also highlight the changes that have been brought in by technological advancements, and how that has affected our efforts towards economic diversification.

The emergence of new sectors, the shift of global economic powers, and the importance of the small and medium enterprises will also be part of the discussion during the two-day summit. This year, the Summit seeks to urge organisations and individuals to be major influencers in their sectors, and support and integrate women at levels.

On the occasion of the International Women’s Day, Sheikha Jawaher Al Qasimi reiterated her commitment to supporting all women in the world, particularly those living in conflict zones and those in developing countries.

“Women living in regions affected by crises and armed conflicts endure harsh living conditions, and play a complex role as peacebuilders through turbulent challenges to preserve unity in both their families and society, and nurture humanitarian values in their children,” Sheikha Jawaher said.

“International Women’s Day is a significant occasion as it helps us see that the world today is more convinced than it has ever been about women’s important role in overcoming challenges, advancing the economy and activating community’s role in development and progress,” Her Highness reiterated.

Sheikha Jawaher referred to the UN’s efforts in supporting women, highlighting that the UN has dedicated one of the 17 SDGs to their advancement, and establishing them as equal players in society.

“The subject of women’s inclusion and empowerment is increasingly gaining in importance during policy discussions in both public and private sectors worldwide. These efforts have created a real opportunity for the world to enter an era of effective female-male partnerships and genuine equity. The only way to make the most of this opportunity is to create a world where we see women’s contributions as key to multifaceted development, encompassing the sociocultural, economic and human development – not just as an economic necessity,” Sheikha Jawaher said.

The NAMA Chairperson also spoke about the UAE’s leading role in making women equal stakeholders in all aspects of social and economic development of the country – a sociocultural model that can be emulated by other countries. “The successful inclusion of women in all aspects of the UAE’s life is attributed to the strong belief of our wise leadership, and our public and private entities’ understanding of the significance of women’s participation in nation-building as a right before viewing it as a job market necessity.”

The first Women’s Economic Empowerment Global Summit (WEEGS) was held in December 2017, under the theme ‘Women Excelling in Economy, with more than 70 speakers and over 1000 attendees, including ministers, internationally celebrated figures, representatives of local and international organisations, international thought leaders on women’s rights and empowerment, gender equity advocates, and entrepreneurs. The two-day global summit called for strengthening partnerships and developing plans and programmes in leading up to the achievement of the United Nation’s 2030 Agenda for Sustainable Development Goals on women’s economic empowerment, which was adopted by the UN General Assembly in September 2015.