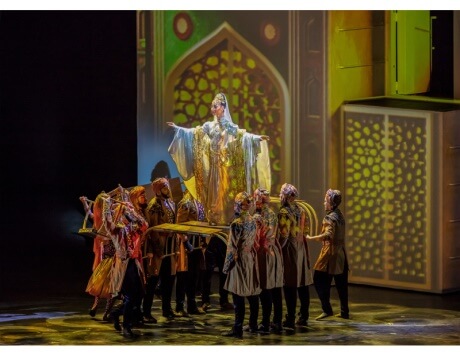 Her Highness Sheikha Jawaher bint Mohammed Al Qasimi, Wife of His Highness the Ruler of Sharjah and Chairperson of the Supreme Council for Family Affairs (SCFA) said that ‘1001 Nights: The Last Chapter’, beautifully underlines the role of humanitarian literature in promoting positive values and ethics in society.

Her Highness said the show highlights the key role of culture in bridging the distance between nations, promote empathy, and establish bonds of mutual respect, tolerance and cooperation.

Sheikha Jawaher lauded the efforts of the team behind the massive production during the show yesterday (Wednesday), at the Al Majaz Amphitheatre. Her Highness noted that the show is a big boost to Sharjah’s ongoing efforts to revive heritage and literature, and inculcate a love for the arts in people of all age groups, ethnicity and backgrounds.

Her Highness pointed out that the key objective of the show was to serve as a call to continue writing and documenting literature. She stressed the instrumental role of writing in passing on knowledge to the future generations, in addition to facilitating communication, the convergence of ideas and reconciliation of views for stability and peace.

Her Highness further commented: “The selection of Sharjah as World Book Capital 2019 represents an acknowledgment of its outstanding role in nurturing the culture of reading under the guidance and vision of His Highness Sheikh Dr. Sultan bin Muhammad Al Qasimi, Member of the Supreme Council and Ruler of Sharjah. Books that disseminate knowledge are the source of every idea that comes into being and develops into an initiative.”

Her Highness Sheikha Jawaher expressed her sincere belief in the cultural journey of the emirate that began over 40 years ago with the aim of having books as a companion to individuals from an early age. Sharjah has been an incubator and a launchpad for initiatives, awards, exhibitions, and forums aimed at delivering books to children, youth, men and women.

Her Highness called on all public and private institutions in Sharjah to organise events to celebrate the prestigious title bestowed on the emirate by UNESCO, and to help in raising a generation of readers, authors and publishers who would contribute to the cultural journey of Sharjah.