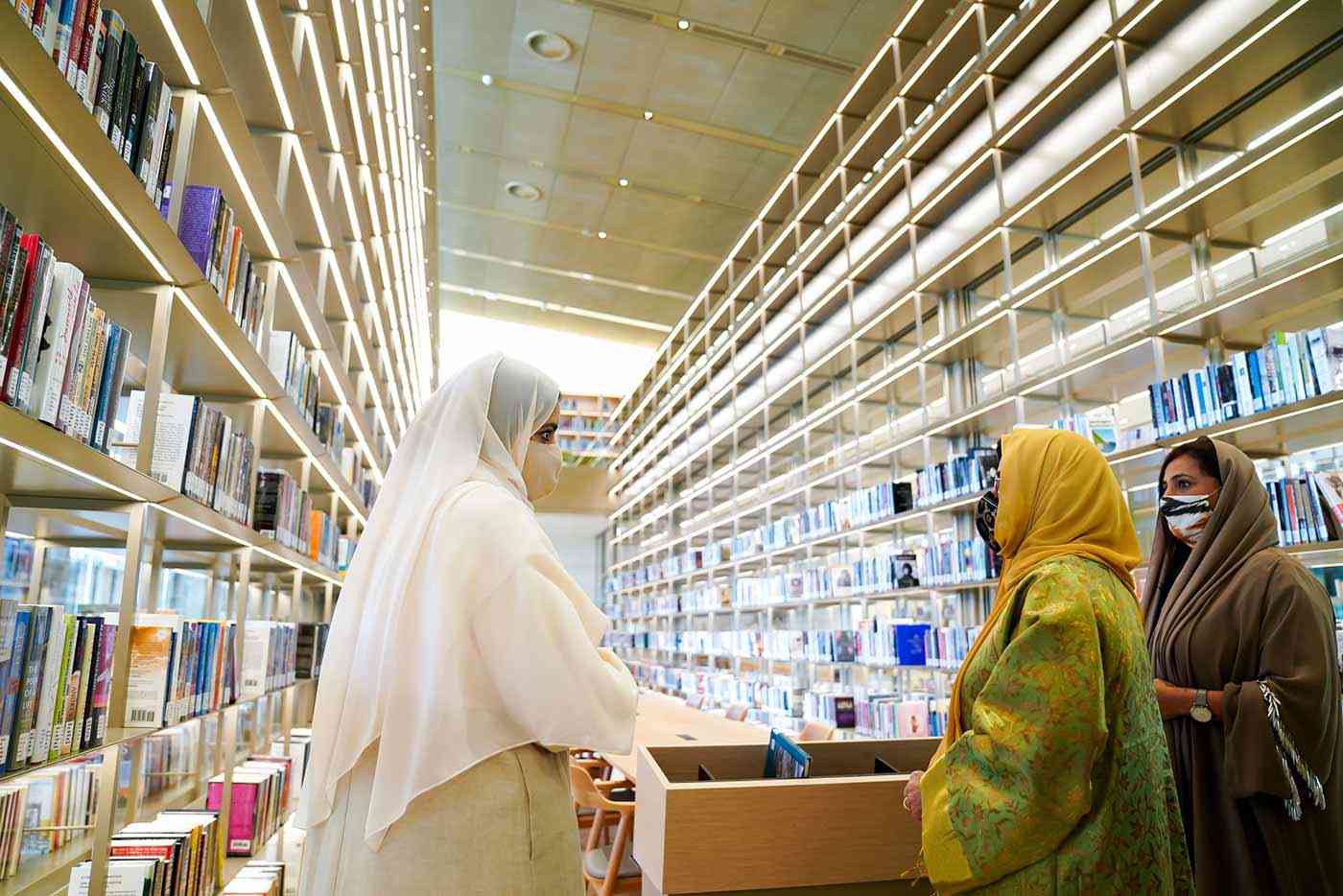 Her Highness Sheikha Jawaher Bint Mohammed Al Qasimi, wife of the Ruler of Sharjah and Chairperson of the Supreme Council for Family Affairs, said that the newly inaugurated House of Wisdom (HoW), an iconic architectural marvel and Sharjah’s new cultural edifice, marks a new chapter in strengthening links between members of the community with their unique cultural identities.

Congratulating the people of Sharjah and the UAE community on the project that serves as an immersive space for learning, sharing, creating, and accessing knowledge for all age groups, Sheikha Jawaher described the HoW as one of the most important pillars in Sharjah’s cultural landscape.

Her remarks came during a visit to the HoW, a benchmark of contemporary Arabic architecture reimagined as a library of the 21st century, and which was inaugurated in December by His Highness Dr Sheikh Sultan Bin Mohammed Al Qasimi, Supreme Council Member and Ruler of Sharjah, to celebrate the emirate’s year-long tenure as the UNESCO World Book Capital 2019.

Sheikha Jawaher said, “The far-sighted vision of the Ruler of Sharjah on the future of the emirate of Sharjah – what it should be and how it should be perceived – and his directives to realise this ambitious vision are embodied both in the several monuments and cultural and artistic centres that have been set up in the emirate and are also carried forward in Sharjah’s milestone accomplishments as an internationally recognised cultural hub, and a child and elderly-friendly, green city.

“The future of humanity lies not merely in new technologies and evolution of machines; it is also about relationships, effective interaction and communication, improved knowledge, and greater harmony between scientific advancements and the social and emotional development of humans. These can be attained through the House of Wisdom, and other centres of culture, science and social spaces found in the emirate,” she said.

She was received by Sheikha Bodour Bint Sultan Al Qasimi, Chairperson of the Sharjah Investment and Development Authority (Shurooq) and Marwa Al Aqroubi, Director of HoW, in the presence of managers of entities operating under the leadership of Sheikha Jawaher.

She toured the monument library which will be home to 305,000 books in various formats, languages, and topics and visited the various sections at the cultural edifice. She was briefed on the spaces dedicated to women and children, including the Ladies Diwan, and the children’s library for 3 to 10-year-olds that offers a great choice of books in both Arabic and English languages.

Sheikha Jawaher concluded her tour with a walk through the landscaped gardens featuring 331 trees of 12 different species, overlooking the Sharjah World Book Capital 2019 monument, “The Scroll.”

Earlier this month, Sheikha Bodour issued an administrative directive appointing Marwa Obaid Al Aqroubi as the Director of House of Wisdom, a “future library” and social hub being brought to life by Shurooq.

Last year, Aqroubi’s notable accomplishments in the field of promoting a culture of reading benefitted her role as the Project Manager of Sharjah World Book Capital 2019.

The decision also reflects Shurooq’s continuous efforts to support and empower female leaders in various fields. An ardent lover of books and a champion of knowledge, Al Aqroubi has been an active member of the UAE’s cultural scene.