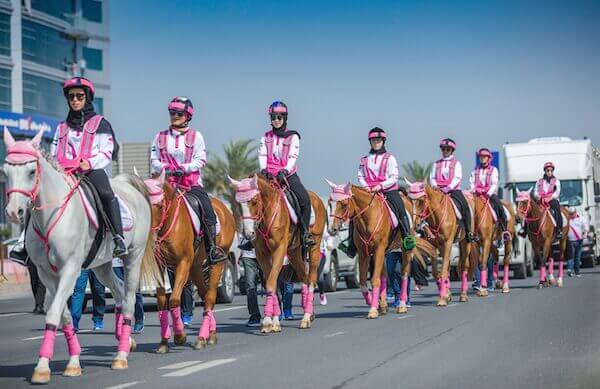 Her Highness Sheikha Jawaher bint Mohammed Al Qasimi, Wife of His Highness the Ruler of Sharjah, Founder and Royal Patron of the Friends of Cancer Patients (FoCP), has approved February 23 as the inaugural day of the ninth edition of the annual Pink Caravan Ride (PCR), which will be raising the banner of breast cancer awareness and offering free medical consults to residents and citizens across the length and breadth of the UAE until March 1, 2019.

In its past eight editions, PCR’s achievements have been instrumental to heightening Emirati’s community knowledge about breast cancer, and to correcting misconceptions about the illness. It travelled 1,700 km across the seven emirates with 490 riders and 700 volunteers, providing free medical tests and screenings to 56,000 men and women, which have led to the diagnosis of 61 breast cancer cases.

Her Highness Sheikha Jawaher Al Qasimi, International Ambassador for the World Cancer Declaration of the Union for International Cancer Control (UICC), said: “The Pink Caravan represents a pillar of the Emirati community. It is a manifestation of the solidarity our upbringing is based on. All the hard work that makes every edition of the Pink Caravan Ride a success is not only reflected in the awareness it offers; the campaign is an example of the unitedness of the UAE community, and how we live as one family under the nation’s roof.”

Her Highness Sheikha Jawaher has called on all segments of society; its citizens and residents, women and men to gear up and partake in PCR’s 9th edition. Participation opportunities include administrative duties, riding opportunities, medical and civil volunteering, as well as donation campaigns.

Each year, the Pink Caravan (PC), a pan-UAE breast cancer awareness initiative, organises this ride, which travels around all seven emirates educating people through its four different routes. The Equine Route sees 150 female and male equines from all nationalities advocating awareness through the seven-day campaign. The Medical Route is led by 30 fixed and mobile clinics, as well as 200 medical personnel who offer free medical examinations. The Events Route hosts a series of community events and fundraisers. The Fundraising Route is represented by over 150 volunteers.

In February 2018, the PC launched the permanent mobile mammography clinic, which offers a comprehensive package of medical services for all members of the community throughout the year. It provides 3D mammographic screening and diagnostic breast imaging, as well as cervical screening tests, which is the first service to be added to a mobile medical unit at the global level. Other medical tests offered at the clinic include diabetes and blood sugar level, blood pressure, osteoporosis, as well as height and weight measurement.

The announcement of the dates for the 2019 edition of PCR comes right after PC has concluded its month-long awareness campaign marking the Breast Cancer Awareness Month in October. Through informative lectures and educational workshops through their corporate wellness day campaign, PC has educated several public- and private-sector employees on the importance of regular self-examination as a method early detection of breast cancer. Participants also underwent free medical tests and screenings.